American actress and singer, Traci Braxton has been on the radar of so many social media users who expressed their shock and surprise when the actresses drastic weight loss surfaced online in one of her recently uploaded pictures.

Prior to her death, so many speculations have spread like wide fire as to what really is the cause of her death, evidenced in her stunning weight loss. 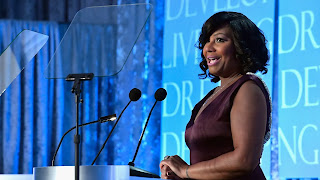 On March 12, 2022, Braxton passed away. She had been battling esophageal cancer for more than a year, which ultimately led to her passing away from the disease. Leaving behind beautiful memories of her spent years in the musical industry, that has seen her feature in classical stage performances being an actress and social media personality.

Going by the full name, Traci Renee Braxton, Traci was born on April 2nd, 1971, in Severn, Maryland, in the United States to Michael Conrad Braxton Sr. and Evelyn Jackson. Following a sequence of older and elder siblings, Traci is the third-born in the prestigious Braxton family.

Groomed alongside her siblings – an older brother, Michael Braxton Jr. born in 1968, an older sister, who was a seven time, Grammy award winner, Toni Braxton, born in 1967, and 3 younger sisters, Towanda, Trina and Tamar born 1973, 1974 and 1977 respectively, Traci has always been on the path to stardom, in company with her siblings. The journey to stardom began taking shape and form, as her first performing experience was in the church choir.

Being a citizen of America, she has been relatively active in the music industry ever since 1989, featuring in R&B, soul world, and pop label genres. Traci and her sisters Toni, Towanda, Trina, and Tamar Braxton signed a record deal with Arista Records in 1989. The sisters later became backup singers for their beloved sister Toni’s first U.S. tour after the “Breathe Again” singer went solo in 1991.

In 2011 the women reunited for the popular reality show, “Braxton Family Values” which also featured their mother. They also appeared on “Celebrity Family Feud” in 2015. Traci was a star on “Marriage Boot Camp” along with her husband. She released her debut solo studio album “Crash & Burn” in 2014.

Traci is married, to the love of her life, Kevin Surratt. The couple met each other at quite a young age and have been together for over two decades, although having been separated by the cold clutches of death. The union has produced a son by name, Kevin Surratt Jr.

While Traci Braxton was undergoing treatment for esophageal cancer, she battled with several ailments that made it look more of a hell experience for her and those around her. At this point, the most obvious sign of esophageal cancer is significant weight loss.

Though it was all happening kept away from the general public, Traci Braxton dropped more than 60 pounds when she was undergoing chemotherapy treatment for cancer. So it wasn't surprising, how that the vast majority of her supporters, were taken aback by her sudden and dramatic weight loss, when recent pictures of her reduced figure surfaced online.

At a sad and disheartening age of 50 years old, Traci on her death bed, closely surrounded by her mother and siblings, she bade a final farewell to them, after fighting with all her might, as expressed in the words of her husband.